One is a Dominican-born pitcher suspended 50 games for violating MLB’s Drug Policy, another is a Harvard graduate with potential to do anything he sets his mind to and the third is a Houston-born guy that has steadily improved in four years.

It is not common for a team to have all three on the same pitching staff – but the Brewers’ Rookie team Helena does.

In the Rocky Mountain air where the Pioneer League’s worst pitchers has given up eight home runs – none of the three above are among the top five. But all three have impressive Strikeout-to-Walk ratios and have displayed flashes of brilliance in their short careers. 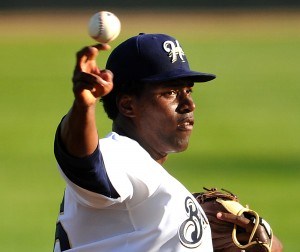 Righty Leonard Lorenzo, a 21-year-old pitcher signed as an undrafted free agent out of the Dominican Republic has been the team’s workhorse starting ten games and has pitched 55 innings and has struck out 55 batters and walked 21.

At times, Lorenzo had been given no run support and has come away with the loss despite having solid pitching performances for Helena.

Lorenzo had a game where he struck out 12 hitters in six innings allowing one earned run but still earned the loss for the H-Brews August 8.

The H-Brewers did give Lorenzo adequate support in his July 30 appearance by coming away with a 5-4 victory. Of those four runs, Lorenzo accounted for one earned run. Through the progression of the season, Lorenzo has been worn down.

Two recent draftees by the Brewers have been brought in to ease the pressure off of Lorenzo and both have began to rise to the occasion.

Tall and lanky Harvard graduate Brent Suter (4-2) was drafted in the 31st round in the June draft has slowly crawled out of the depths of a rotation-by-committee ordeal the Brewers are faced with.

For most people, Harvard graduates do not necessarily go there to make it to professional baseball. But Suter hasjuggled positive work within his college community while earning a 3.43 GPA in Environmental Science and Public Policy.

Suter is not one of those students, and has often been quoted in the Harvard student newspaper as having the desire to pursue a career in the Major Leagues.

The Cincinnati-born pitcher has pitched 43 innings, good for second most on the team, and has struck out 42 batters while walking just eight. Suter’s earned run average of 3.92 has steadily improved through the progression of the season.

In his professional debut June 27, Suter gave up six earned runs in 1.1 innings. In his nine appearances since, he has allowed just 11 earned runs and has calmed down from the jitters of being in professional baseball. 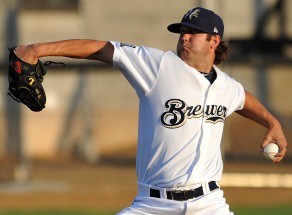 In spite of Wall’s history as being a soft-tosser with below average fastball, he has gotten considerably better since scouts took a look at him in high school.

In addition, Wall became the first pitcher to lead the H-Brews to a shutout victory this season.

Both Wall and Suter have similarities pitching for the Cape Cod League in the summer months.

Among all three pitchers with the most potential to have the most success in professional baseball, Brewers Farm Report suggests Suter.

At 6′ 5″ and weighing in at 195, Suter has plenty of room to add weight and be the most coachable of the three pitchers and history shows he has been the most consistent year-after-year from the time he was in high school up until today. Being a left-hander can be a valuable asset along with having a better fastball than his fellow lefty Wall.

To add to this suggestion, Lorenzo has already been under the microscope by Major League Baseball for his 50-game suspension. And the 21-year-old pitcher has experienced extreme highs and lows through the progression of the season while Suter and Wall have consistently shown some improvement.

By all appearances, Wall does have an advantage of being a predominant ground-ball pitcher with sinking movement on his pitches.