While most fans recognize the roads Segura and Greinke traveled since the trade deadline deal, questions linger about the development of Hellweg and Pena.

As both pitchers completed their first full season as members of the Brewers’ organization, Brewers Farm Report looks at whether Hellweg and Pena have realized their potential and a future prognosis.

Hellweg, 25, was one win shy of tying for the league lead in victories with 12 and posted a 3.15 ERA to put him second among qualified pitchers.

Prior to his June recall to Milwaukee, Hellweg rattled off a string of five consecutive victories, winning six of his last seven decisions.

Hellweg allowed eight earned runs through 44.1 innings pitched during the scorching stretch of games to give him a meager 1.62 ERA. He also allowed just 19 walks and 32 hits to give him a cumulative 7-4 record upon arriving in Milwaukee.

However, he struggled in his initial Major League stint allowing 13 earned runs and 13 walks in 11 innings with an 0-3 record entering the All-Star break.

In his Major League debut, he did not make it beyond the second inning after giving up five earned runs in 1.2 innings pitched. Consequently, he was charged with the loss. Hellweg received two more losses in his next three decisions.

Johnny Hellweg pitching for the Nashville Sounds in 2013. (Credit: milb.com)

Milwaukee opted to assign him to Single A Wisconsin to reduce travel time and allow him another start due to Triple A Nashville already on hiatus.

Hellweg’s second stint with Nashville was similar where he posted a 5-1 record, but endured a rough outing in Denver when he gave up five earned runs in five innings to receive his only loss August 10.

The Brewers’ third ranked prospect earned his sole Major League victory August 7 when he defeated the Chicago Cubs at Wrigley Field. However, he allowed three earned runs in six innings. If not for Logan Schafer’s three-RBI triple to help the Brewers to a narrow 5-3 win, it would have been a different scenario.

Despite stellar minor league statistics, Hellweg still has much to prove at the Major League level and will start the season with Triple A Nashville due to Milwaukee’s starting rotation locked up.

Yovani Gallardo, Kyle Lohse, Wily Peralta and Marco Estrada secured the top four spots with Tyler Thornburg as the frontrunner for the final position in the rotation.

If Thornburg is dealt, Hellweg will need to compete with Milwaukee’s top rated prospect Jimmy Nelson following Nelson’s success in limited action for the Brewers in September 2013.

“We want to see again if he can bounce back and do it again,” Roenicke said. “And when I say do it again, I know he threw a lot of pitches, I know he walked people, but I also know he only gave up a couple runs against a good team. So we’ve definitely got to see him again.”

It was a rough season for right-hander Ariel Pena with multiple No Decisions on a Huntsville team providing little run support.

Aside from 2013 Brewers’ Minor League Player of the Year Jason Rogers and Southern League Home Run Champion Brock Kjeldgaard, there were no clear cut offensive threats to give him any breathing room in his more successful starts.

Pena endured a stretch of 11 straight winless starts from June 3 through August 5, allowing 11 of his 17 home runs during the slump.

However, he received little support including a July 5 start where he allowed three earned runs through seven innings striking out seven in a 3-1 loss to Tennessee.

In the same stretch where he accrued 60 innings pitched, he allowed 39 of his 59 total earned runs but managed to keep his walk totals down to 35.

Pena’s final five appearances were significantly better with a 3-1 record and 1.24 ERA in 29 innings.

The pitcher also produced his best outing of the season with a sparkling eight inning No Decision where he held Pensacola scoreless and struck out eight batters in a 1-0 extra inning victory by the Stars.

Pena produced three of his six scoreless outings in the final five games of the season, including a five inning performance against Jackson. He struck out six batters and allowed just one walk and two hits to cap off a struggling season. 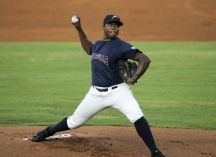 Unfortunately, Pena was unable to carry the success into the Dominican Winter League where he allowed three earned runs including two home runs through 1.2 innings pitched for in two appearances for Tigres de Licey.

The right-hander could be projected as part of a loaded Nashville rotation in 2014 including Nelson, Hellweg, Hiram Burgos and potentially Taylor Jungmann.

In order for Pena to progress, he will need to shake off the reputation as a pitcher who has the habit of getting breaking pitches up in the zone. If he is unable to improve in pitch location, he could be a formidable relief pitcher.